Leading up to their upcoming match, Cavalry FC will be saluting the services provided by the Canadian Military as well as First Responders in recognition for all the hard work they have done for the country and community. From the club’s name to its badge, Cavalry carries several military elements in commemoration of the forces and its history. Ahead of the fixture, long-time Cavalry supporter Captain Mike Mirtle sat down with the club to discuss the upcoming match, and what the military involvement with the club means to him. 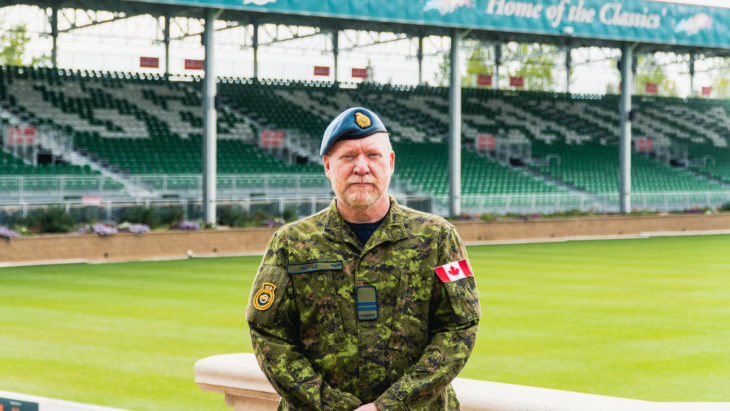 “There’s a long history of military service within my family that goes back hundreds of years. Both my grandfather and father served, so I knew that was what I wanted to pursue.” Mirtle has spent nearly 40 years in the military and has served with the Navy Reserve, Canadian Coast Guard, and the Royal Canadian Air Force. When returning to Calgary, Captain Mirtle was excited to learn that a professional soccer club was coming to the city. “Soccer has been a part of my life since I was a kid. I used to play when I was young, then once I joined the military, we’d all play together to help maintain fitness on a casual basis. Once I moved back to Calgary and heard that a professional league was coming to the city, I was thrilled.”

Captain Mirtle has been following Cavalry since the club’s inaugural season and enjoys attending matches with his daughter, who shares a similar passion for soccer. “It’s great because my son is now a member of the Navy, so we can connect with each other through that. Then with my daughter, we have this sport and Cavalry to experience with each other. The atmosphere and the environment during matches here at Spruce Meadows are like no other. It’s so easy to attend matches and it’s even better that it provides such a great bonding experience.”

In 2019, Cavalry dedicated their alternate kit to the military with a camouflage kit, this season, the alternate kit is a military green that features a chevron design as a nod to the military. Every season, the kits have featured the flag of the Lord Strathcona’s Horse, tying into the rich history and pageantry of Spruce Meadows and the Canadian military. Alongside the Spruce Meadows Leg Up Foundation, the club has also created a military patch as part of their Patches for a Purpose campaign. Proceeds from every military patch sold will go towards the Canadian Legacy Project.

“Calgary has such a rich military history and seeing that connection with Cavalry is fantastic. It’s all support within the community and to have all of that tied together is great to see.”

Cavalry FC continues their push toward a playoff berth as they face Valour FC on Sunday, October 2nd. With a win, the club will clinch their place and compete in a semi-final to push to reach the final.