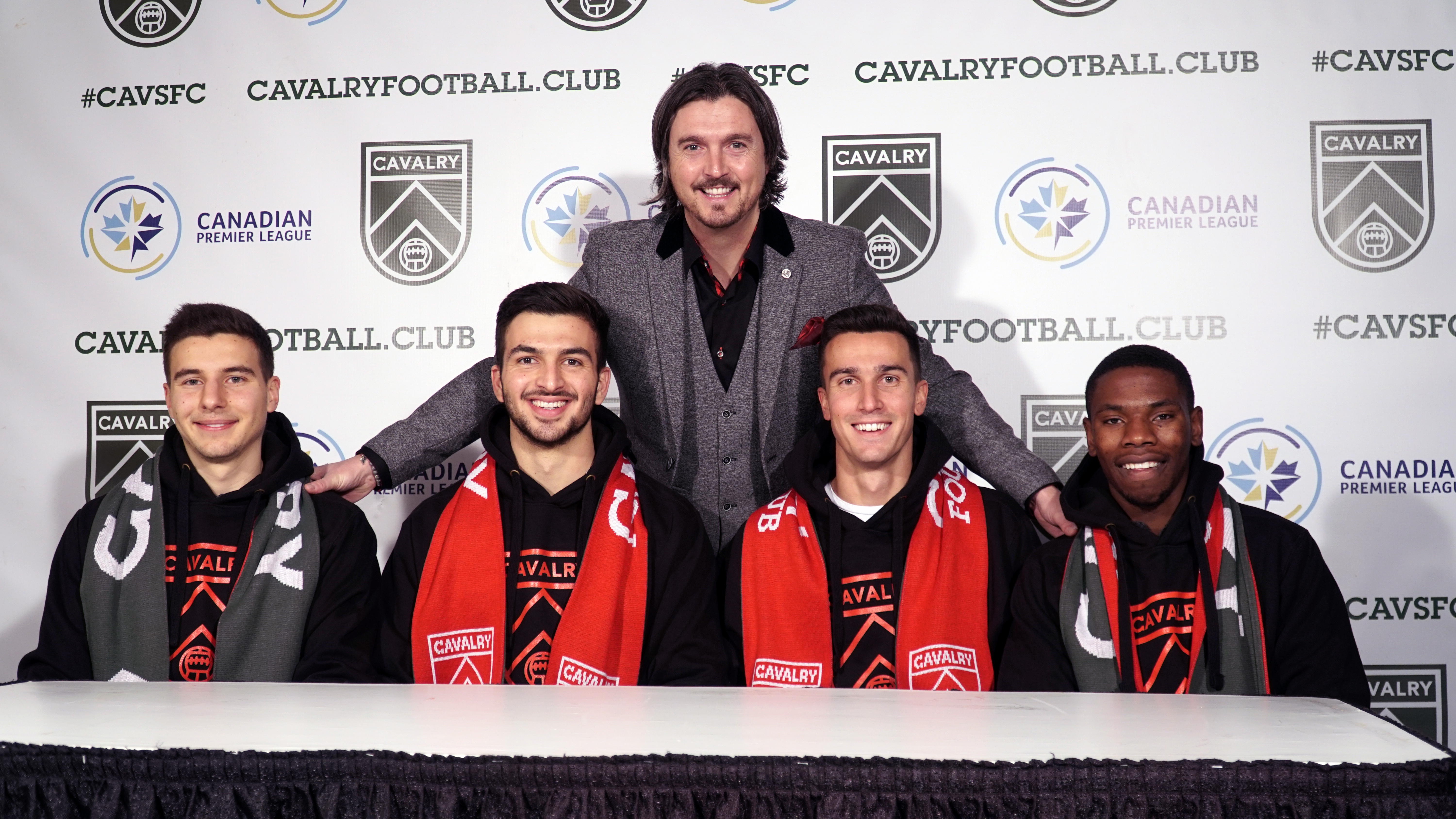 Calgary, AB (December 12, 2018) – Cavalry FC is pleased to announce its latest signings of young local talent for the Canadian Premier League’s inaugural season. Calgarians Marco Carducci, Chris Serban, Dominick Zator and Elijah Adekugbe will be essential towards the identity of the club and its culture as we approach the opening season in April 2019.

Head Coach & General Manager, Cavalry FC, Tommy Wheeldon Jr. states. “These four signings represent our recruitment strategy whereby we are identifying local talent first, then national and international as we build out our squad. When creating a team from scratch, it is highly important to have people in the trenches with you that you trust and believe in. These four players, grew up here in Calgary and are proud to be amongst the first ever players signed in the history of Cavalry FC and who are hungry to fight for this City and write the history we are going to create here at Spruce Meadows”.

From his establishment through McKenzie United community soccer and Calgary Villains program, Marco Caducci, left home as a 14-year old to pursue his dreams of playing professional soccer later landing on the Vancouver Whitecaps roster. “Marco is a highly talented goalkeeper and one who is perfect for the style of play we are looking to develop with the Cavalry, says Wheeldon Jr. “His future is still waiting to be written and we want to be a part of his journey, as he has made his intentions clear that he wants to complete his journey and play for the full Canada National team, having represented them at U17, U20 and U23 levels. Aside from his talent, Marco is a great ambassador for our club and this community”.

Also rising through the Calgary Villains Club, Chris Serban, left home at 16 after a brief spell with Calgary Chinooks to pursue his professional aspirations with the Vancouver Whitecaps. While on the coast, Chris represented the University of British Colombia as he combined his studies with playing on the Whitecaps 2 team. Wheeldon Jr. had this to say of Serban. “Chris is a highly rated attacking full back that has represented Canada at U20 and U23 levels. He is honest, hard working and humble off the pitch but packs a tenacious punch and plays on the front foot when on the pitch. He suits how we want to play as a team, along with the type of character we want representing the Cavalry crest”.

Dominick Zator, was developed from the age of 11 to 18 through Calgary Foothills Soccor Club. He obtained his degree at the University of Calgary and captained their men’s soccer team whilst combining his summer seasons with the Foothills PDL team. “Dominick is a modern centre back that is quick and athletic on the ground, good in 1v1 duals and very comfortable with bringing the ball out of the back, said Wheeldon Jr. “He is also a great example of staying the course and playing the long game in that he was a late bloomer that was never selected for any Provincial or National youth team programs, but concentrated on his club soccer and school. It’s his intelligence that makes him the player we want in our club as he is very cerebral and calculated in his decision making”.

Born in Manchester, England Elijah Adekugbe moved to Calgary Alberta, as an 8 year old where he began his development at age 9 with Calgary Foothills Soccer Club until 18 years of age. His University years were spent at Trinity Western on a soccer scholarship, whilst returning to Calgary during the summer months to play for Foothills FC in the PDL. Tommy Wheeldon Jr. had this to say of Adekugbe, “Elijah is what this league is all about, giving young Canadians a chance. He is someone I have had the pleasure of working with for over 10 years now and I’ve watched him grow as a player and a person. He is a highly technical midfielder that likes to keep his team in possession, almost like a Point Guard would in basketball. He’s a hard working person and a studious player that just needs this platform to grow”.

About the Cavalry FC
Cavalry FC is a professional soccer club based out of Spruce Meadows just south of Calgary preparing to play in the inaugural season of the Canadian Premiere League. Cavalry FC will kick off the season April 2019. For membership and season tickets information visit: cavalryfootball.club

About the Canadian Premier League
Canadian Premier League (CPL) is Canada’s professional men’s soccer league set to debut in April 2019. Playing in world-class and unique venues, and partnering with strong community-led ownership groups, CPL is a league for Canadians by Canadians that will bring professional soccer to communities coast-to-coast.
For updates and more information, please go to CanPL.ca.
Connect with us on Twitter: @CPLsoccer and #CanPL