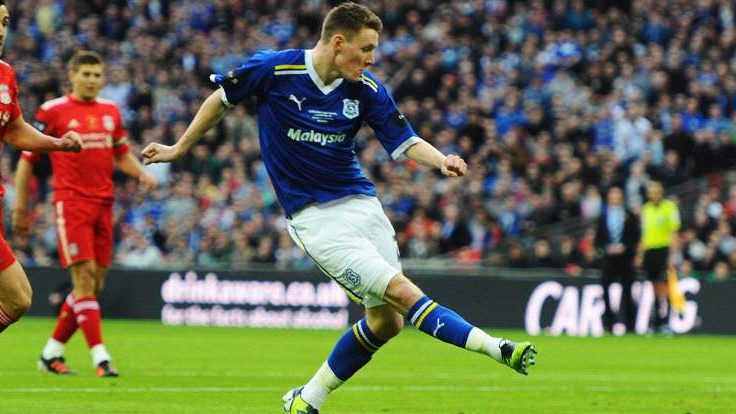 What do Gareth Bale, Eric Cantona, and Joe Mason have in common?

All three have scored against Liverpool FC in a cup final.

Mason, recent marquee signing for CPL side Cavalry FC, definitely counts his goal for Cardiff City in the 2012 EFL Cup Final as his career highlight.

“I don’t know what way to describe it,” Mason told CanPL.ca this week. “Euphoria, maybe? It was an out-of-body experience. I look back at it now, sometimes it pops up on TV now and then and I watch it and think, ‘Was that actually me?’ Because it was just such a crazy moment.”

Very few players in the CPL have a claim to fame anything like Mason’s through-the-legs finish on Pepe Reina to open the scoring at Wembley Stadium (although they lost the game on penalties). David Edgar’s home debut screamer for Newcastle United against Manchester United would be up there, although Edgar is now an assistant coach at Forge FC rather than a player.

“I do have a good memory of it but at the same time it was just such a surreal moment, it’s hard to imagine,” Mason added.

Mason’s long career in England has seen plenty of ups and downs, although it’s unlikely any would match that goal. His professional debut with Plymouth Argyle may come close, though – Mason was born and raised in the Devon city, and he played in the club’s academy from the age of 10, so playing in the Championship with his hometown club would’ve been something special.

“I’m still a huge Argyle fan today,” Mason said. “That was a huge moment for me and my family.”

By coincidence, Mason’s debut came under manager Paul Mariner – yes, the same Paul Mariner who coached Toronto FC in 2012 and 2013. Mason described his former coach as “full of energy” in his time at Plymouth.

Mason eventually moved on to Cardiff, though, where he continued improving as a reliable young goalscorer. The year after that League Cup final, he scored six times to help the Bluebirds win a title and earn promotion to the Premier League. It was a somewhat turbulent time for the club (remember when they briefly switched to wearing red kits at home?), but Mason loved every moment.

“My time in general at Cardiff was just so good,” he said. “Lots of success, lots of change as well. We had a few managers, Malky (Mackay) was great for me, and then obviously Ole came in, changed a lot, but he was still a good guy.”

The ‘Ole’ in question was, of course, Ole Gunnar Solskjaer, the current manager of Manchester United and the short-lived Cardiff boss in 2014.

So, how does a player like Mason – former hero of the Welsh capital and veteran of almost 200 games in the English Championship – end up signing in Calgary, Alberta before his 30th birthday (this Thursday, actually)? It’s actually kind of a funny story.

“It probably looks a bit random, but there is a link,” Mason said. “So I know Jordan Santiago, who is now the goalkeeping coach at Cavalry. I had a year with him at Cardiff City, around eight, nine years ago now. Basically, the kitman that was at Cardiff is now the kitman at (Milton Keynes Dons), and they’ve kept in touch.”

As it turns out, Santiago’s relationship with kit manager Ian Lanning led him back into contact with Mason, who had signed for MK Dons in 2019.

“So they were just sort of chatting, and you know what, I don’t even know how it really came about,” Mason explained, “but I know them two were chatting, and it’s sort of come from there. My agent spoke to me about if I would be interested, and then it sort of took off from there.”

“I’ve had quite a few chats now with Tommy, and it was all good stuff. The way he wants to play suits me, I’ve done my research on the squad, they’re a strong team,” Mason said. “To be honest, it was a no-brainer in terms of, I want to experience something new, a new league and a new way of life as well. That’s something I’m really, really excited about.”

After playing in England for so long, something unique like the CPL appealed to Mason. He’d experienced football in North America before, having spent a few months on loan at MLS side Colorado Rapids in 2018. Playing south of the border isn’t exactly the same as playing in Canada (although he did play away games in both Montreal and Vancouver that year), but the experience was a good one.

“It’s so different to the English league, obviously the travel’s huge,” Mason recalled. “Living in Colorado, in the Mile High City, it takes time with the altitude, that was tough the first few weeks. Different time zones, it’s just mad. But I suppose I’ve got all that to come again. It was something I enjoyed, and I’m really looking forward to it.”

Mason is still in England at the moment, although he’s scheduled to arrive in Calgary in June. In the meantime, we’ll have to speculate on how much of an impact Mason might have on the club.

Very few players in the CPL can boast a resume anywhere near Mason’s – particularly not with the recent retirements of David Edgar and Marcel de Jong. Still, conclusions cannot yet be drawn. For his part, Mason is looking forward to contributing to as much of the attack as possible; he describes himself as a ball-playing striker with who thrives on one-touch finishes inside the box.

“I know it’s boring, but the main thing for a striker is to score goals,” he added. “That’s what I’ll be judged on and that’s what I’ll be trying my best to do. I’ve seen what the league’s all about, what the standard is like. It’s a good standard, it’s not gonna be easy that’s for sure.”

Still, it’ll be up to the seven other CPL teams to do in 2021 what Liverpool could not all those years ago: Keep Joe Mason off the scoresheet.