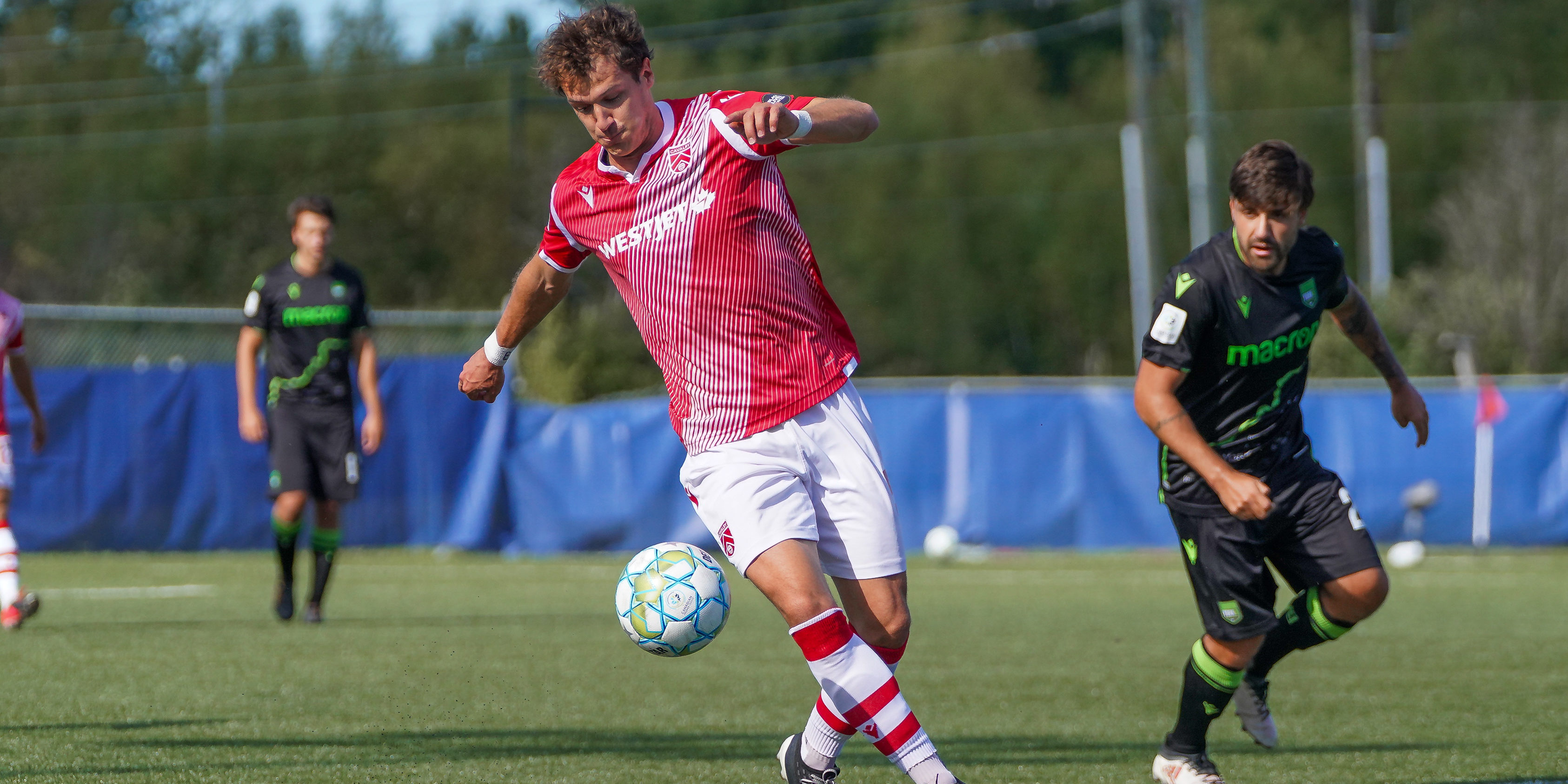 By collecting three points, Cavalry clinched a second-round berth at The Island Games. But winger Oliver Minatel was taken to a local hospital after suffering a serious lower-body injury in the first half, putting a damper on the Cavs’ post-game celebrations.

While Cavalry clinched top spot in the CPL’s first-round table (with 13 points), York9 (third place, 10 points) must await the results of Sunday’s Pacific FC (sixth place, eight points) vs. FC Edmonton game to see if they advance. If Pacific wins, York is eliminated. If Pacific loses or draws, York advances. Regardless of the result in Sunday’s HFX Wanderers FC vs. Atlético Ottawa match, either HFX (fourth place, nine points) or Ottawa (seventh place, eight points) will move ahead of York in the standings.

Coming off back-to-back losses in PEI, Wheeldon Jr. made five lineup changes, including Jordan Brown starting up top. Y9’s Jim Brennan made three changes, with Joseph Di Chiara (back from suspension), Michael Petrasso (returning from injury) and Chris Mannella in the starting 11.

The match came to a complete standstill in the 12th minute when Minatel crashed to the ground following a challenge for a 50/50 ball by Y9’s Roger Thompson.

After receiving treatment from team trainers for several minutes, Minatel was stretchered off the field and was taken to a local hospital. Minatel was replaced by Marcus Haber. Thompson did not receive a caution on the play.

Our thoughts are with you @OliverMinatel. You will return better than ever.

The rest of the first half quietly unfolded, with only half-scoring chances coming from Cavalry’s Nik Ledgerwood and Y9’s Ryan Telfer.

The first shot on target didn’t come until the 55th minute, when Cavalry goalkeeper Marco Carducci comfortably handled Petrasso’s attempt. Moments later, Y9’s Nathan Ingham made a great point-blank save on Haber’s header from close range off a corner kick.

The breakthrough came in the 69th minute as Haber pounced on a rebound given up by Ingham off Nathan Mavila’s shot from outside the box and slotted it home.

Saturday’s loss was York’s first of The Island Games.

Cavalry will be back in action next Wednesday, the first matchday of the second round at The Island Games.

Cavalry FC: Show some desire – Cavalry coach Tommy Wheeldon Jr. admitted his team lacked desire and were soft in their last game, a 2-1 loss to Pacific FC. The Cavs showed more spirit against Y9, and didn’t let the injury to Oliver Minatel take the wind out of their sails.

York9 FC: Aparicio free kicks – Y9 captain Manny Aparicio scored from gorgeous free kicks in each of his team’s previous two matches. But he never had a chance to make it three in a row, as Cavalry stayed disciplined in their tackling and defensive marking in and around the 18-yard box.

It couldn’t have been easy to enter the game off the bench and replace Minatel. But the Canadian international didn’t let what happened to his teammate affect his play. He was dangerous in the Cavs’ attack and showed great composure on the winning goal.