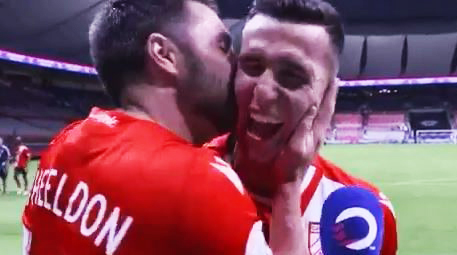 Cavalry FC claimed the first win from a CPL club over MLS opposition on Wednesday, taking their second leg and the Canadian Championship Qualifying Round 3 tie 2-1 over the Vancouver Whitecaps at BC Place in Vancouver.

Tommy Wheeldon Jr. and co. will now move on to play Montreal Impact on the Semi-Final – a second MLS side.

An MLS club losing to a non-MLS club in the CanChamp is rare, let alone to a team that has yet to finish its first season. But the Cavs showed their quality – regardless of history – against a fellow western Canadian pro club that produced several of Cavalry stars … Dominick Zator included.

As Wednesday bled into Thursday morning, plaudits came in from CPL players, coaches and others in the Canadian soccer landscape as Cavalry celebrated a first-of-its-kind victory.

We start things off with, well, a celebration.

A kiss heard across the country: Jay Wheeldon shows his admiration for Dominick Zator live on OneSoccer.

Elijah Adekugbe and co. applauding the away support… Tag yourself…

What a game! History made!

Forge FC all-rounder Kwame Awuah had a statement to make early on Thursday morning from Ontario.

To @tommywheeldonjr and your @CPLCavalryFC players, a special hat tip on doing what nobody said a CPL team could do.

See you all on the sideline where we will continue to compete but for tonight, lets celebrate the growth of our league together.#WeReManyWeAreOne

Congratulations to Cavalry FC, their staff and players. Simply fantastic result and more importantly the performances over two legs.

Road support BC Place was easy to spot…

But how about the crowd back home in Calgary. An impressive night for the Foot Soldiers…

Cavalry’s weekend opponent in the league doesn’t seem pleased … or are they?

Congratulations to @CPLCavalryFC on advancing to the next round of the @VoyageursCup! You did us proud…

…K, this feels weird and we hate it.

Back to despising you on Saturday. (Come despise them with us, #ValourArmy 👇)

We’ll see how Valour really feels on Saturday when they hosts Cavalry (1 p.m. ET/12 p.m. CT, OneSoccer/CBC) at IG Field in Winnipeg. The Cavs will be back in action in the Canadian Championship on Wednesday, August 7th when they open their Semi-Final tie against Montreal Impact at Stade Saputo.