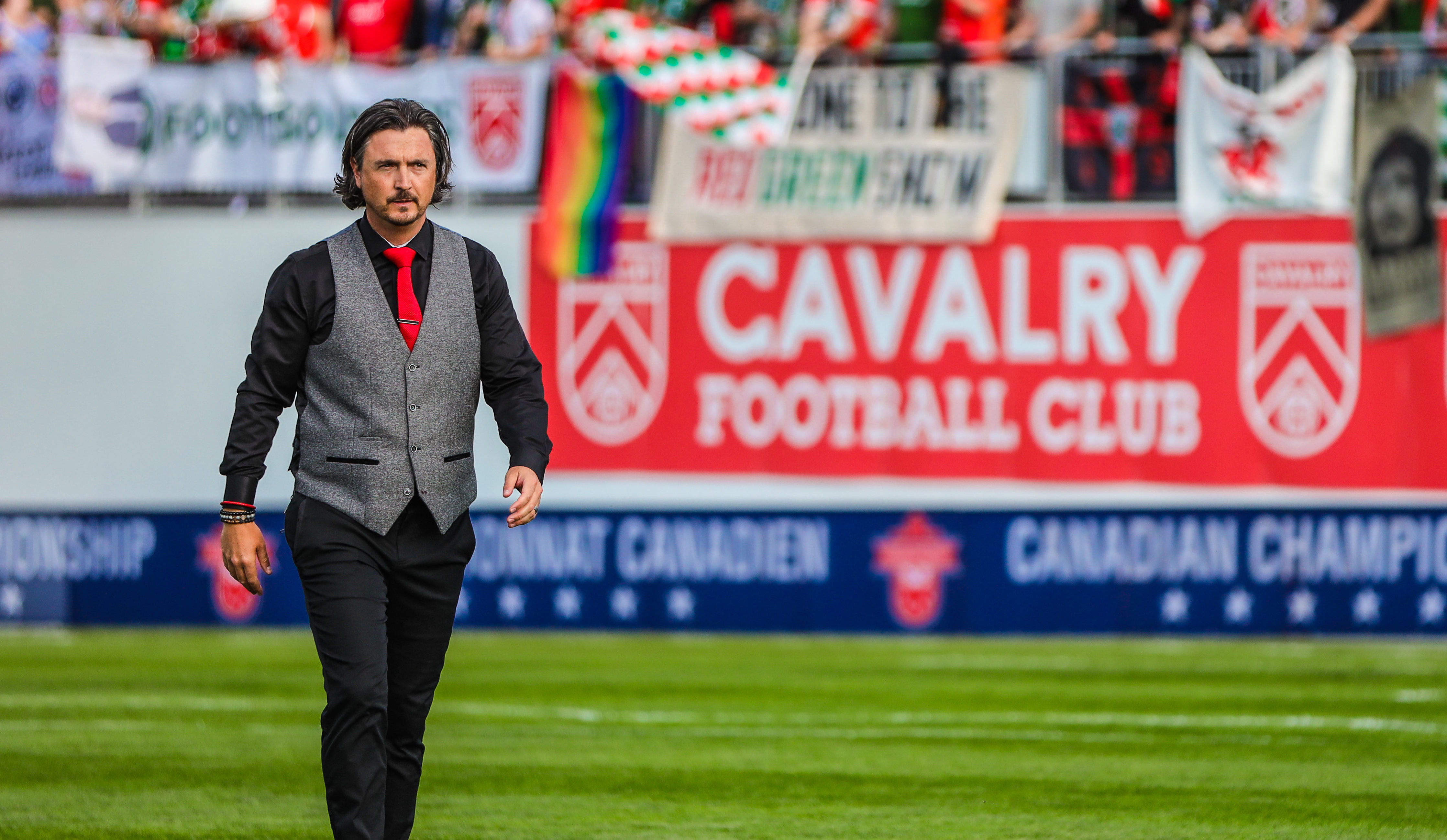 CALGARY – Did you ever wonder how Tommy Wheeldon Jr. came by his keen fashion sense?

Or why the Cavalry FC coach speaks his mind in such a frank manner? Or why he approaches the game from a tactical perspective that differs from the norm?

In a lengthy interview with CanPL.ca ahead of Leg 2 of the Canadian Premier League Finals vs. Forge FC on Saturday (3:30 p.m. ET, 1:30 p.m. MT, available on OneSoccer), Wheeldon explained that he’s a chip off the old block – that the greatest influence on him is his father and his former coach, Tommy Wheeldon Sr.

“My dad dared to be different,” Wheeldon Jr. said. “Football is a game of Xs and Os, but it’s more than that. I think I’ve shown that in a lot of the ways I present myself and even in my tactical formations, to dress style. Dare to be different.”

He continued: “My dad told me one thing, and this helped early on my coaching career more than anything. He said coaching is about people, and you need to have the ability to coach a seven-year-old girl to a 30-year-old professional. If you can do that and understand how to get your message across to them, you’ll have success.”

Wheeldon Jr. was clearly able to get his message across to his players during the 2019 CPL regular season. Cavalry romped to the Spring title, and then edged out Forge to claim the Fall championship, losing a mere four times across both campaigns. They also upset the Vancouver Whitecaps en route to reaching the semifinals of the Canadian Championship.

Along the way, Wheeldon caught the attention of CPL fans with his vibrant personality, both on and off the field, again, taking after his dad.

“You can see where I get a lot of my energy from. He just lives and breathes the game,” Wheeldon offered.

Wheeldon Sr. left school back in England when he was 18 and signed with Everton. He stayed with the Toffees for two years before working his way through the English lower leagues and then got into coaching at a young age.

It was while Wheeldon Sr. was at Exeter City in 2002 that an opportunity to come to Canada to coach the Calgary Storm in the old USL presented itself.

“Michael Vandale was the owner of Calgary Storm back then, but he was also a director on the board at Exeter City in England,” Wheeldon explained. ”

My dad was at Exeter when Michael flew in to pay his annual visit to the club, and he met my dad. My dad had this magnetic personality that Michael was drawn to, and he offered my dad the opportunity to come to Calgary.”

Wheeldon’s father was going through a divorce at the time, and he viewed Vandale’s offer as an opportunity to start a new chapter in his life. He moved to Alberta to take charge of the Calgary Storm, and sent for his son to come over to play for him – Wheeldon Jr. began his playing career in England with Swindon Town and Torquay United before coming to Canada.

After the Storm folded, Wheeldon Sr. became technical director of the Calgary Blizzards, while his son eventually took charge of Calgary Foothills. Suddenly, they were competing against each other and running in the same circles.

“That’s why I started carrying the junior name. He developed his name in Calgary, so I had to differentiate myself from my dad,” Wheeldon said.

Eventually, Wheeldon Sr. moved back to England, where he’s still involved in coaching to this day, at age 63.

“He’s been a great influence on me. … He offered me the chance to come across the pond and play for him at Calgary Storm. I came over and I’ve not looked back, so I have a lot to be thankful for him for providing this avenue into coaching for me,” Wheeldon said.

Today, Wheeldon Jr. finds himself in a similar situation to when he played under his dad, as Jay Wheeldon, Tommy’s younger brother, is a defender with Cavalry FC.

“I think that’s why it’s been easy for me to manage and coach my brother. My dad has this great ability to separate things. Dad could be my harshest critic and my biggest supporter. If I played poorly, he let me know it, and he would give me the gears. If I played well, he’d congratulate me,” Wheeldon Jr. said.

“There was no nepotism. I had to earn every right to play, but he didn’t show favouritism; he was honest with me, and I’m the same with my brother.”

Wheeldon Sr. returned to Calgary earlier this month to attend Cavalry’s final game of the regular season, a 3-1 victory over FC Edmonton in Al Classico, watching the game from the stands with the Foot Soldiers supporters group. He was also in Hamilton for Leg 1 of Finals 2019, before returning home to England.

Some habits die hard, and Wheeldon expects to hear from his dad before Leg 2 on Saturday.

“It’s interesting, I talk a lot with my coaching staff, and we formulate plans. I never have to ask my dad for advice because he’s of that ilk that he’ll give it to me anyway, whether I want it or not,” Wheeldon quipped.

“He’ll be on the phone telling me this and that, and what I should think about. He’s always blunt in his honesty, and I appreciate that. He’s a good sounding board.”