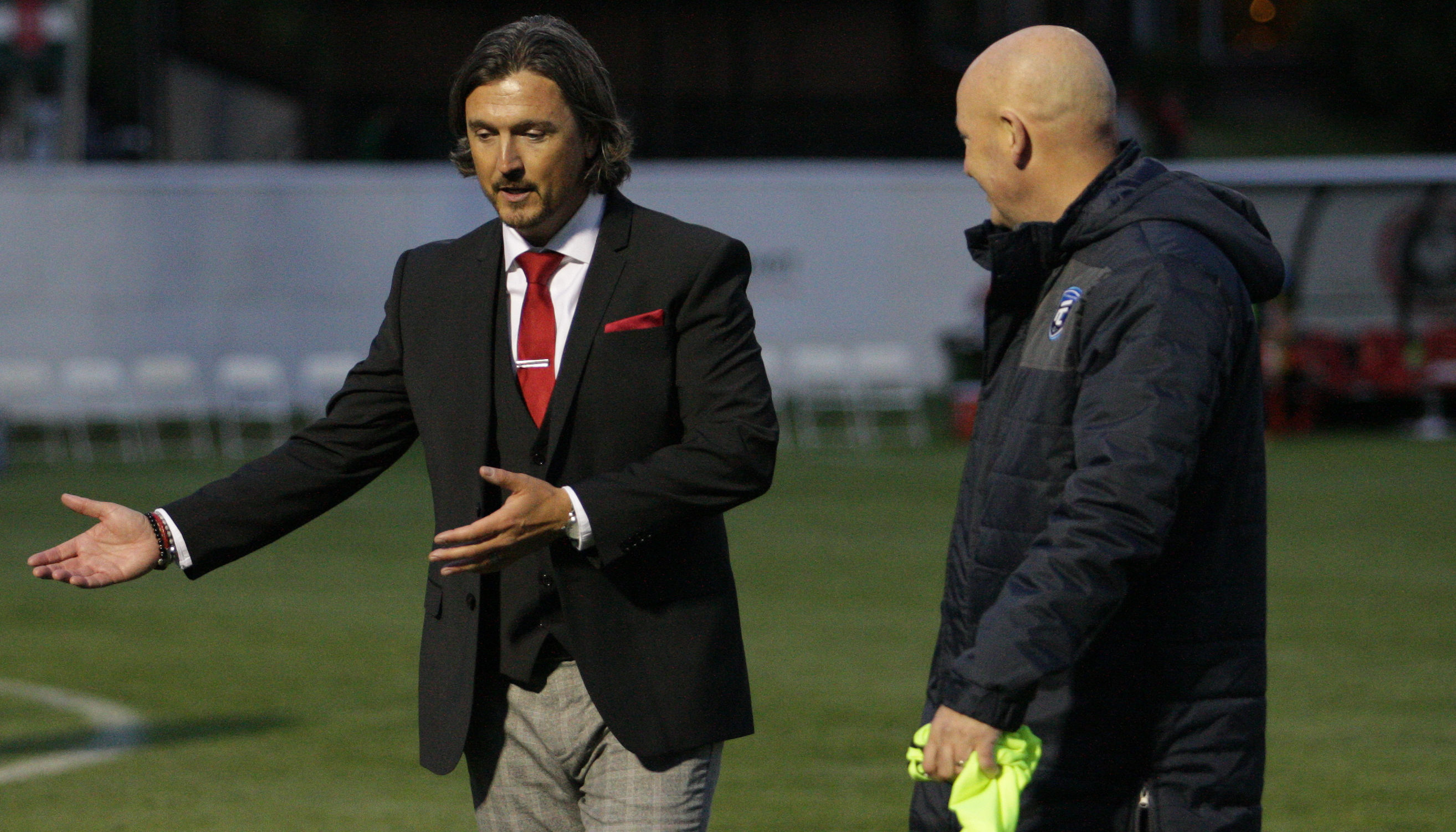 TORONTO – There are a few moments in a journalist’s career where the stars align so perfectly that you stop and wonder for a moment if some grand universal force willed it to be so.

“Personally, I was hoping we were going to get Ottawa to be truthful, because of our history with them,” Paulus told CanPL.ca, when asked about his kick off against the Cavs. “But, you know what, for me, the Al Classico rivalry is better in the summer. You have a chance to get more fans out for us then, obviously in Edmonton, than in April. So, we have no idea what it’ll bring. We could be in a snowstorm, -15, in April. I like Cavalry games when …”

Suddenly, as if by fate itself, who should walk through the doors of the Canadian Premier League front office but Tommy Wheeldon Jr.?

“That’s okay – it’s hard to criticize when you haven’t beat ’em though,” Wheeldon Jr. replied, leaning over this reporter’s phone with the sort of cheeky smile that only brothers share when they’re up to no good.

“That’s true, that’s true …” Paulus continued. “Although, it is a new season–”

“– and everybody starts at zero,” Wheeldon Jr. interjected.

“On being unbeaten so far this season!” Wheeldon Jr. quipped, throwing back his head and laughing.

“My god. Hopefully I can say that after we’ve won,” Paulus replied, with a chuckle. “You’re our home opener.”

Indeed, the two will be squaring off on April 18 to kick things off in Edmonton with the first of four regular season Al Classico bouts, with Paulus’ newly-revamped outfit hoping to gauge their growth and evolution with a quick fire double-header against both Forge FC and Cavalry in 2020.

“I love that our first two home games are against the two teams from the final last year,” Paulus told this reporter, once the interview continued. “What a great way to see where you’re at, right off the bat.”

“Can you do it in a cold night in Edmonton?” Wheeldon Jr. offered CanPL.ca, when also asked about the occasion. “It’s actually good to have a fairly close proximity to get fans to drive to early on. It creates a spectacle. If we’re to grow the game, we need not just one rivalry, but several. We’re creating that.”

Last season, FC Edmonton and Cavalry FC produced one of the more scintillating matchups in the Canadian Premier League. But, the nature of the two teams’ fates meant that Cavalry would walk away undefeated over five bouts, leaving Paulus without any bragging rights over Wheeldon Jr. by year’s end.

Change has come to Edmonton, though. The addition of a number of interesting new faces – Hanson Boakai chief among them – has turned the Eddies’ offence on its head. As such, Paulus is hoping this year’s Al Classico kicks off with a new result, and ends with some new silverware.

“My first priority is to just get one win against Cavalry,” Paulus admitted. “We’ll start with that. But I want to win the Wild Rose Cup. It’s a major trophy for our province, and I want it in my showcase.”

Wheeldon Jr. added: “Jeff and his staff have been busy in the off-season tweaking a few things, because we all know there was a big gap at the top in points. That’ll be a lot closer this year, because everyone’s doing their homework and redefining themselves. FC Edmonton are one of them. We’ve got two really tough but pivotal opening games that are on the road. We have to adopt that road warrior mentality and approach them as we did last year; respect their strengths and nullify them, and then look to expose any weaknesses. That won’t change, but their strengths and weaknesses will have.”

It’s a sentiment that Paulus echoed, too – the Canadian Premier League race is looking a lot closer in 2020, and with a third-place playoff spot on the line, everyone will be more motivated by the final stretch than ever before.

“I expect a lot of the teams to be closer this year,” Paulus said. “I certainly think that every team has closed the distance. I’ve been impressed with the improvements of Pacific FC, and York has certainly added some key pieces. Halifax looks brand new, and every team seems to have gotten better. So, I think you’ll see a closer league.

“And, if you look at the influence behind Ottawa, I suspect they’ll also come out of the gate flying, with their access to players around the world. I expect to see seven top internationals on their roster, and there are a lot of good Canadians still unsigned, so this year should be a lot closer.”