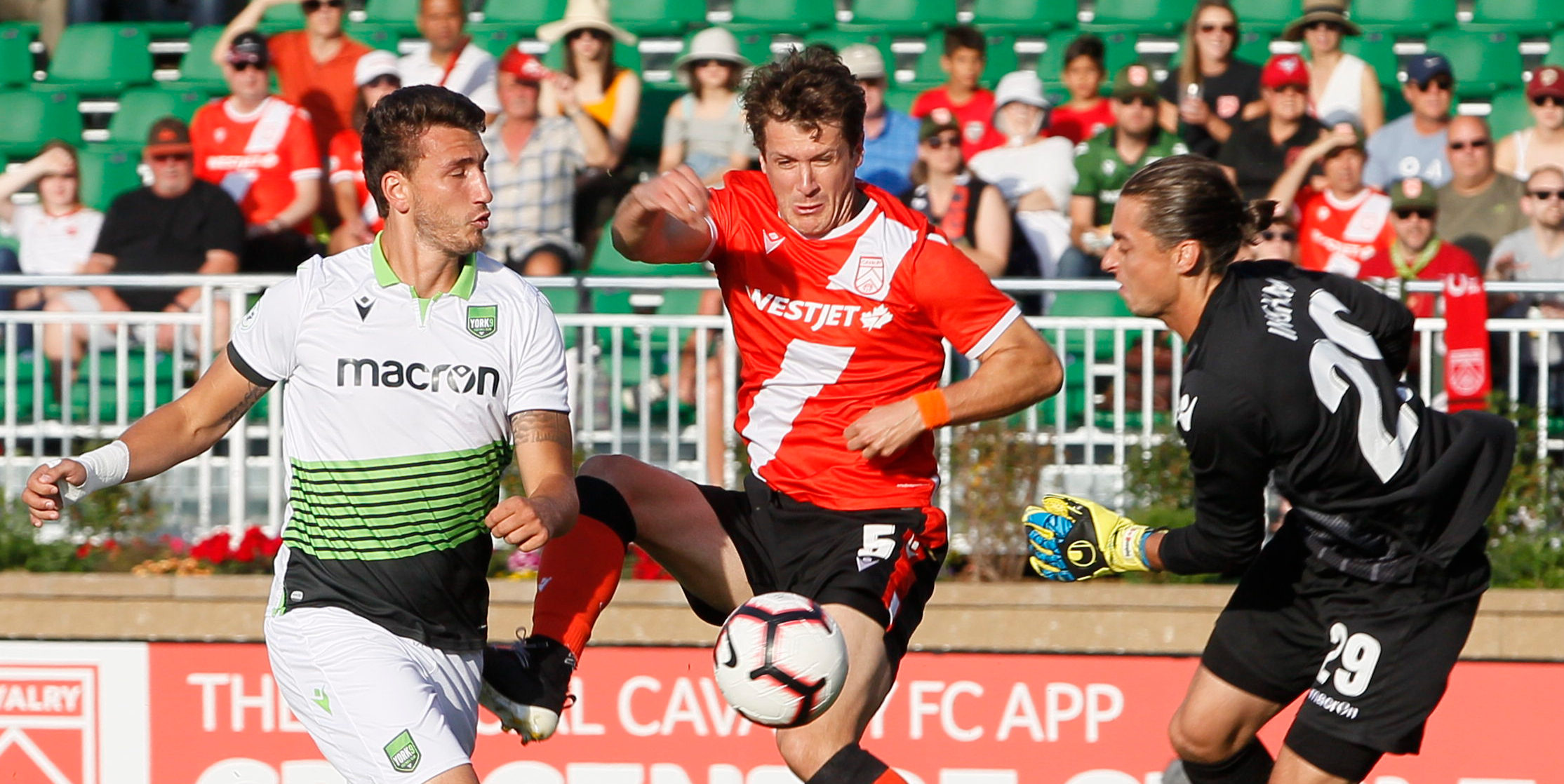 CALGARY — The drought is over for Cavalry FC.

It’s been three matches between league and Canadian Championship play since the team from Calgary found the back of the net, and the group was able to emphatically get the job done Wednesday at home versus York9 FC.

“We were magnificent tonight, weren’t we?” head coach Tommy Wheeldon Jr. said of his squad’s 3-1 victory. “It should’ve about 15-1, but we’ll take the three points.”

The Cavs had the foot on the gas early, with several chances in the opening five minutes, including one that beat York goalkeeper Nathan Ingham to make it 1-0 — the first of an eventual brace for Dominique Malonga. The striker’s performance move him into sole possession of third in the Canadian Premier League scoring race with six goals.

“They took one away from me,” Malonga stated of his potential hat trick marker being waived off. “What can I do? I tried my best to help my team. I’m happy for the team.

“Everyone knows we had a really tough week, like against Montreal, and that affected a lot of people. We had only 24 hours to prepare against Edmonton. We’re a good team, and we got the result. We just showed the mentality we have. Tommy, the boss, just every day, he’s there to tell us we have to go again and again, that we can’t relax. That’s why today we have a good game.”

Also nothing to sneeze at? Julian Buscher’s spectacular free-kick goal moments before the half-time whistle, cooly struck just outside the 18-yard box, that would be the game-winner.

“A terrific kick that Julian and the boys have been working on,” Wheeldon Jr. said. “You also saw some great open play goals.”

For the club, it also feels good to get back into the win column, with Cavalry entering action against York winless in three CPL tilts, including two recent 0-0 stalemates.

“It was never our performance,” the head coach said of past showings. “We didn’t have time to work on the nuances.”

It’s three crucial points, given the state of the tight Fall season standings in the Canadian Premier League. Cavalry now sits in top spot, with Forge FC and Albertan rivals FC Edmonton closely in the rearview at 13 and 12 points, respectively.

“We want to win the Fall season,” Wheeldon Jr. simply stated. “In order to do that, we need to put together performances like that [versus York].

“We had a great run [at the Canadian Championship], but now it is time to focus on the league. If we’re going to be the best in the league we’ve got win the games that matter and keep putting our best foot forward.”

Cavalry only has two meetings at home over the coming 30 days — next Wednesday welcoming Pacific FC for the first time since May. From there, the Calgarian outfit will be all over the map, with September stops in Winnipeg, Edmonton, a quick trip home back to Spruce Meadows for another date against Pacific before hitting the road to play in York.

One situation to monitor for Cavalry is the status of midfielder Sergio Camargo, who exited the game before the 30-minute mark. He had just returned to the lineup after sitting out the second leg of the Canadian Championship semi-final versus the Montreal Impact due to injury.