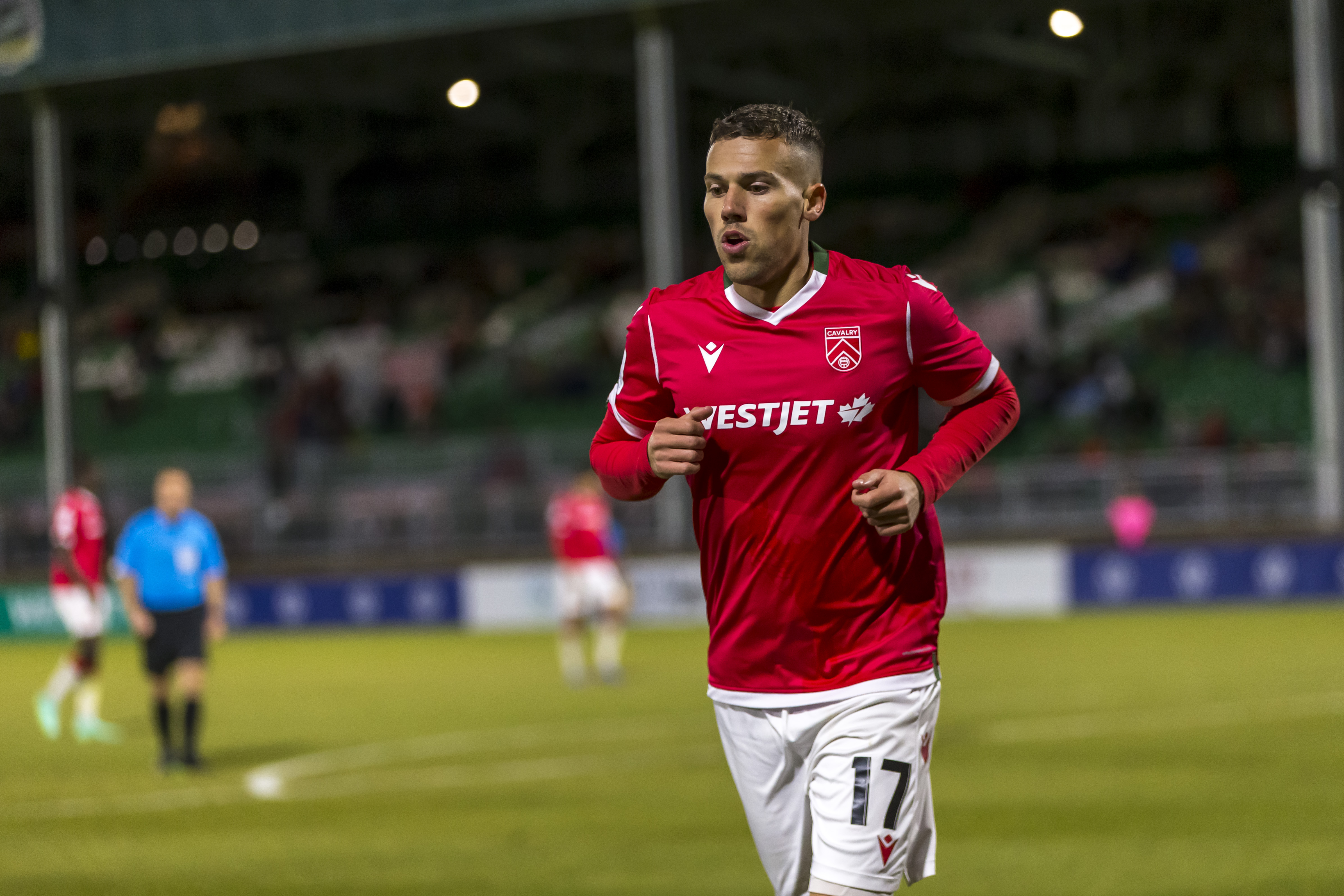 It was predicted to be a thriller, and boy was this an entertaining matchup between Cavalry FC and Pacific FC. Things got off to a quick start when a header in the sixth minute from Daan Klomp handed the hosts an early lead. With their momentum flowing, Cavalry continued to push forward while the visitors struggled to find their footing. Late in the game, a free-kick from David Norman Jr. made things 2-0 before Sean Young pulled one back for Pacific. Yet despite the dramatic finish, the hosts held on to win 2-1, go top of the table and book a spot in the playoffs.

ATCO Field was yet again a fortress on Thursday night and a cracking atmosphere saw the hosts playing in their element with the support from fans acting as the twelfth man on the pitch.

Between the roughly 2,100 fans in the stands, drums banging and chants echoing, it was sometimes even difficult to hear the commentators on OneSoccer (through no fault of their own). This latest win against Pacific demonstrates that ATCO Field continues to be Cavalry’s safe haven. They maintain an unbeaten record at home this season (four wins and four draws) and Tommy Wheeldon Jr.’s men are undefeated in four consecutive matches as a result.

“Love them, our supporters, like for me they’re the best in the league,” said Wheeldon after the match. “When we score a goal as well,  I think [the atmosphere] is really, really important for us and it’s been really good for us to move forward.”

Playing Cavalry at home proves to be a big task for any CPL opponent and if the Cavs host any of the playoff matches, it could be a massive boost in their run for the title.

Prior to the match, both coaches alluded that a match between two of the CPL’s top teams would most likely come down to mistakes. And unfortunately for Pacific FC, that point came true. Both goals they conceded came through brief mental lapses – something somewhat uncharacteristic of coach Pa-Modou Kah’s side.

In the first half, neither Lukas MacNaughton nor Alessandro Hojabrpour picked up an unmarked Klomp in the box for the opening goal. Cavalry, as a result, were up 1-0 with their first shot on target. As the match went on, Pacific continued to have an unsettling performance. One moment, in particular, saw the visitors make three poor passes within a two-minute spell allowing Cavalry to regain possession and continue lunging forward – an observation which sums up their night. Then late in the game, the winning goal also ended up coming off another error. A late challenge from Hojabrpour on Joe Mason allowed Norman’s pin-point free-kick see the hosts keep three valuable points.

“I think we didn’t start right, gave away a very cheap goal on set plays which we’re not happy with,” said Kah after the match. “We gave away a cheap free-kick that led to our second goal and after that, we were trying to push forward … We’ll go back to the drawing board and just learn from our mistakes and move on … We’re still going to trust our process and we’re still going to learn from the things that we can do better.”

Despite Young’s late consolation goal, the visitors only have themselves to blame for missing a massive opportunity to clinch a playoff spot.

Over the course of 90 minutes, both sides went head-to-head attempting to limit the other team’s threats – but one side managed to achieve that task quicker, and more efficiently than the other. Every man on Cavalry’s squad knew their game plan and executed it almost to perfection.

The dedication, drive and focus on the pitch, as a result, helped the hosts maintain a slim lead at the break. And even though the match was still in reach for either side at halftime with things sitting 1-0, Wheeldon’s men came out into the second with even more intent to get the job done. They didn’t let their foot off the gas whatsoever, limited the effects of the ever-so-deadly Terran Campbell, Josh Heard, Alejandro Diaz and Marco Bustos while also constantly calling goalkeeper Callum Irving into action.

“It was about the tactical game plan and I’m just proud of the lads away they executed it,” said Wheeldon. “The fact that we won, and were in control of the game and reducing them and being able to score on a bit of magic, and I said that in the press conference before, we’re working very, very hard now on our tactics.”

“[Pacific] never makes it easy for us as a coaching staff. But we’re certainly where we should be. First and foremost we’ve clinched [a playoff spot] and now it’s about where we finish in the table.”

“Out of all the teams I’ve been at, this group of boys definitely work the hardest I’ve ever seen,” added Tom Field. “We had a game plan, [Wheeldon] set out our game plan. I think we executed it, especially in the first 15 minutes, and I think it was up there with one of our best performances [tactically].”

Pacific FC, on the other hand, couldn’t regroup coming out into the second half and it was too little too late for any of Kah’s substitutes to try and have any substantial impact.

A constant threat down the left wing, Ben Fisk continues to prove why he was a vital addition to the squad. A key part of almost every attacking wave from Cavalry, his performance helped the hosts hold on to all three points. Fisk finished with two shots, one chance created, one tackle and an 85 per cent pass completion rate.

Cavalry get ready to welcome Valour FC to ATCO Field on Saturday, October 30 (1:30 pm MT/3:30 pm ET). Pacific FC, meanwhile, travel back to British Columbia for a clash against FC Edmonston on Tuesday, October 26 (7:30 pm PT/10:30 pm ET). Watch all matches live on OneSoccer. In addition to its website and app, OneSoccer is now available on TELUS channel 980 and on Fubo TV. Call your local cable provider to ask for OneSoccer today.