AS LOCATION FOR 2020 SEASON

The Island Games to Begin August 13.

Toronto, ON – (July 29, 2020) – Today, the Canadian Premier League, together with its Owners, Clubs and Player leadership, is pleased to announce Charlottetown, Prince Edward Island as the location for the CPL 2020 season.

The CPL and the Province of Prince Edward Island have been working tirelessly with the Owners, Players, Government of Canada, City of Charlottetown, and other partners to finalize the details on a location that would include the mandated public health protocols and measures that will govern the season.

The safety and well-being of Prince Edward Island residents, as well as Players, Coaches, Officials and staff is the single most important issue and it is vital that appropriate health and safety protocols are in place and agreed to by all stakeholders – Players, Clubs, Owners, League, Canada Soccer (the Canadian Premier League’s governing body) and PEI organizers and partners.

The made for TV event – The Island Games – will commence on Thursday, August 13 with a rematch of the 2019 season finalists Forge FC vs Cavalry FC and will conclude in September (schedule announcement to come). All games will be played to closed doors in a sequestered environment in Charlottetown. Organizers are exploring the opportunity to create an exclusive fan zone for minor soccer players from across the Island to share in this excitement while following public health measures. All matches will be broadcast exclusively via the Canadian Premier League’s media partner OneSoccer.

The League was in deep discussions with the City of Langford, British Columbia and Moncton, New Brunswick as potential locations for the season – we are appreciative for the time and the input each of these groups put into their bids for consideration. It was a difficult decision between these three great Canadian cities. 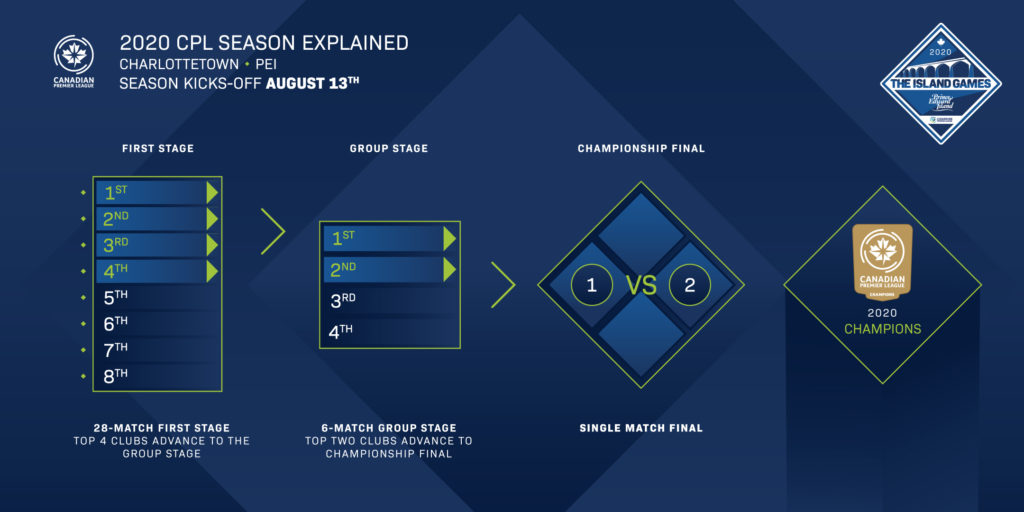 We are here to bring the joy of soccer – everyone wants to create some
sense of normalcy and continue with the spirit of the game we love.

The Island Games will commence on Thursday, August 13 with a rematch of the 2019 season finalists Forge FC vs Cavalry FC and will conclude in September with schedule announcement to come.

The season will begin with an 8-club first stage where each CPL team will play each other once (28 game total first phase), the top 4 clubs will advance to the second round 6 match group phase that will culminate with the top two clubs competing in a single match Final to be crowned the 2020 Canadian Premier League Champion.

Since there is no home-field advantage it will be a one-match Final to crown the 2020 Canadian Premier League Champion who will be awarded the North Star Shield and a 2021 CONCACAF League berth.

Charlottetown is the birthplace of Confederation and one of most nationalistic and historic parts of the country. We are so honoured and appreciative that Prince Edward Island wanted to step up and offer the CPL a home for our 2020 season. The people of PEI, the businesses, the politicians, everyone demonstrated their desire for us to be here and that it’s a safe place to play.  We in turn have implemented the utmost protective measures that will have us arriving on August 8 to align with health and safety protocols and we will be completely sequestered and respectful of our wonderful host city.

The people who call Prince Edward Island home have a reputation for warmth and hospitality. Wherever you are on the island, people are sure to help you out and make you feel at home. Their island is rich with history and beauty, and they are more than willing to generously share their time and resources with respectful visitors.

All matches will be played at the University of Prince Edward Island (UPEI) Alumni Field in Charlottetown, PEI. The complex features a full-size FIFA quality turf surface that can accommodate soccer and is equipped with stadium night lights.  FIFA tests measure material construction, durability, player/surface interaction, ball/surface interaction and field construction. The facility is a FIFA-certified artificial turf field and was resurfaced in August 2016. This ensures the maximum level of performance and quality experience for players.

The safety of everyone involved in this event is our top priority. The Canadian Premier League and all participants will follow all federal, regional, and Provincial public health and safety protocols to execute this event. The CPL has developed strict health and safety protocols that have been approved by the PEI Chief Public Health Office. These include a responsible approach that manages risk for the residents of PEI, but also for our players and all other participants in the event.

The health and safety protocols for the Island Games have been developed over a number of months in consultation with the World Health Organization (WHO) Return to Gathering for Sport protocols, government health authorities including the province’s Chief Public Health Office, medical experts including an infectious disease specialist, microbiologist and front line clinical practitioners, along with protocols from other professional leagues around the world that have already returned to play, and Canada Soccer’s Medical Advisory Committee.

Almost all the participants in the event are Canadian or will have been in Canada for quite some time following mandatory quarantine periods and are operating under strict Return to Train and Play protocols. They also continue to follow all mandatory health protocols in their respective local markets. Any international players arriving into Canada before the event will travel to their home markets first, follow the mandatory 14-day quarantine period, and be tested before they leave to travel to PEI.

In partnership with the Canadian Premier League’s media broadcast partner OneSoccer, fans will:

We have a very exciting announcement on how our founding season seat holders can be part of this event and support their Club. Today, our Clubs ticketing teams will be in contact with season seat members via email about an exclusive membership program that offers unique and specific benefits and gives fans the opportunity to support their Club, support the League and be a part of The Island Games.  Watch your inbox!