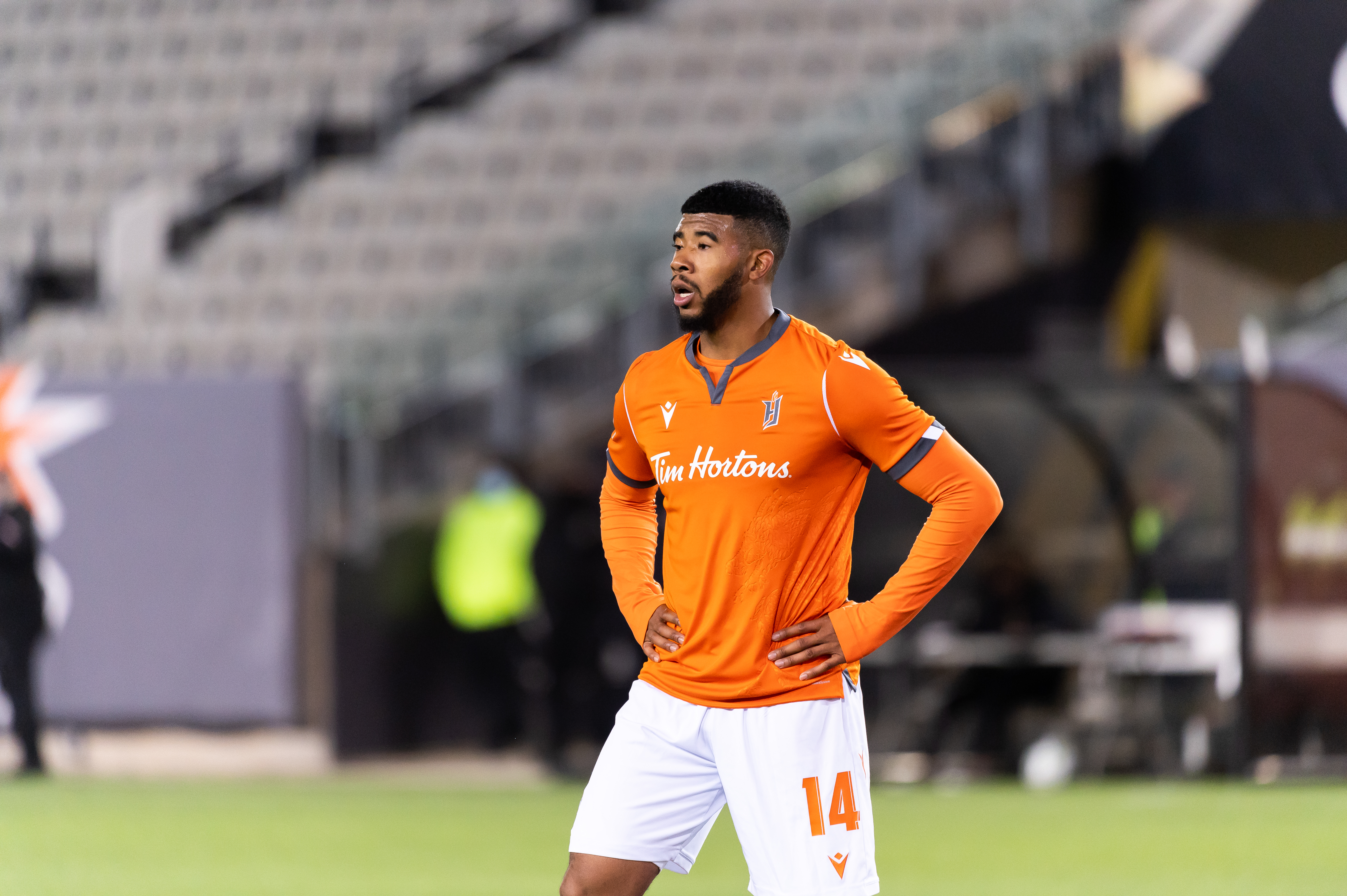 An early goal from Anthony Novak was enough for his Cavalry FC side to pick up three points in the Canadian Premier League’s regular season finale on Tuesday night. With the 1-0 win, Cavalry equal Forge’s points total, with 50 from 28 matches at the top of the table. Forge FC hold onto top spot as a result of winning more matches than Cavalry. Other than the early goal, both sides played very well defensively in what could be a preview of the final in a few weeks time.

Cavalry FC striker Anthony Novak spent the first two years of the CPL in the orange of Forge FC before making the move to Cavalry FC ahead of the 2021 season. Tuesday’s match was his first trip back to Tim Hortons Field as a visiting player, and he soaked up the occasion.

“It’s pretty nostalgic to be here, this is obviously where I started my professional journey,” said Novak after the match. “The locker room tonight is the locker room we were in when I was on trial initially back in 2019. It’s nice to be back.

“We had a small discussion in training as to whether I’d get booed or not. I voted that I wouldn’t, and I didn’t actually,” he added with a laugh. “You obviously want to score in any game, but it’s special scoring against your old team of course.”

“Novak’s a very good player, he’s a guy that was here for two years and did a very good job,” said Forge FC head coach Bobby Smyrniotis after the match. “That was a little bit of an early Christmas present today, the giveaway by Dom (Samuel) and him sneaking back there.

“Not taking anything away from him, love Novak. He’s a very good player who did a great job here, and I’m happy to see that he’s doing well over there as well.”

On the pitch, it was his goal that won the match for his new team. After a press from Jose Escalante freed the ball, Novak picked it up at the edge of the area and held off Daniel Krutzen and Triston Henry, before putting the ball into the empty net.

“Escalante jumps out and Samuel, I don’t think he’s seen him on his blind shoulder,” Novak recalled. “He pops through, and I did the easy part. Escalante did all the running.”

Forge focus on positives, despite second loss in a row

In their final two regular season matches, Forge FC lost 1-0 twice — first to FC Edmonton on the weekend, and now this 1-0 defeat to Cavalry.

While losing matches is never ideal, of course, the Forge players and staff are still confident that they can pick up a big result in the semifinal, and that they’re looking at the positives from these matches instead of the final result.

“There’s a lot of positives,” said Smyrniotis after the match. “The one thing we know about playoffs is that it’s one game and anything happens. What happened before basically goes out the window, let me put it that way. We’re playing York on Sunday. I believe there’s a 14-point gap, but that means nothing for 90 minutes.

“It’s a loss going into the playoffs, but it doesn’t really mean a lot. We wanted to try something a little bit different today, something that we hadn’t been able to try all season, and that’s what we’ve wanted to use these last two games for.”

Disappointed with conceding in the first few minutes of the match on Tuesday, Forge defender Daniel Krutzen was still happy with the effort in the remaining 87 minutes, and keeping the ball out of the net for the rest of the way.

“That’s what this group has always shown, we’re able to come back from that,” he said. “When stuff happens, you move on. You can’t change the past, so you have to move forward and try your best to change the scoreline. Unfortunately that didn’t work tonight, but we’ve been able to do that in the past.”

Both sides turn attention to the playoffs

Now that the 2021 regular season has come to a close, both teams turn their attention to this weekend. The CPL playoffs get underway, and both sides are hosting semifinals.

Cavalry take on Pacific FC at ATCO Field on Saturday, before Forge FC host York United at Tim Hortons Field on Sunday. If both Cavalry and Forge win in front of their fans, they would meet at Tim Hortons Field in a rematch of the 2019 final. Forge have home field advantage through the playoffs after finishing first place in the regular season.

The two sides enter the playoffs in opposite form, as Cavalry are coming off two wins, whereas Forge have been defeated in their past two matches.

What ultimately matters, however, is how you perform in the playoffs. Forge have been there before, winning back-to-back North Star Shields in the first two CPL seasons, and their big game experience in CONCACAF League as well is invaluable.

“We’ve played some big games in the past three seasons,” said Krutzen. “We can handle the pressure, we’ve shown that in the past. Sunday is no different, it’s another semifinal, it’s a do-or-die type of game, and I think this team is comfortable in those games. We just have to take care of business on Sunday to then move onto the final.”

After rotating the squad a bit for this match, a big semifinal against Pacific FC becomes priority number one for Cavalry.

“Obviously there’s some rotation today, so we’ll have a bunch of guys fresh coming back for the playoff game,” said Novak ahead of the game against Pacific FC on the weekend. “It’s a team that we know very well, we’ve played them so many times, and played them pretty well in recent games.

“You want to come to Hamilton and get players some rotation, but you also want to come away with three points, so it’s positives all around.”

An early goal for the former Forge attacker saw his new club pick up a win to end the regular season.

Watch all matches live on OneSoccer. In addition to its website and app, OneSoccer is now available on TELUS channel 980 and on Fubo TV. Call your local cable provider to ask for OneSoccer today.